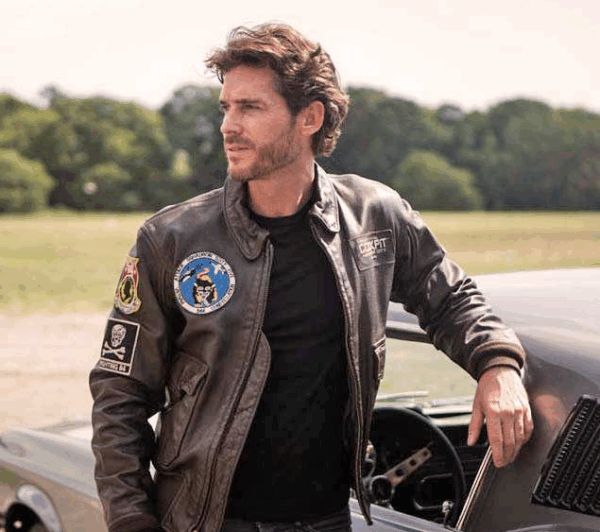 Close menu
Product information "Cockpit G-1 U.S.S. Forrestal"
Usually the G-1 features a mouton collar but the tropical heat in the Gulf of Tonkin led to a more practical and comfortable leather replacement collar.
The jacket is also fitted with a large array of fighter squadron patches that mirror the FORRESTAL based naval squadrons: The F-4 PHANTOM flying VF-41 “BLACK ACES” and VF-84 “JOLLY ROGERS”. A single VA-65 “FIGHTING TIGERS” patch is sewn to the front panel of the jacket
The back is meticulously hand painted and shows a fine drawing of the USS FORRESTAL that is complemented by a matching sleeve patch. You’ll also find the famous “GULF OF TONKIN YACHT CLUB” patch that has been added to this stunning jacket.
Each sample of this special edition jacket has been given a special hand applied treatment to achieve a subtle worn-in appearance. This was skilfully carried out and along with the hand painted back adds to the “one of a kind” character of every jacket.
The 325 metre/ 1067 feet USS FORRESTAL was put into service in 1955. At the time it was considered to be the first “super carrier” and it was even large enough that a Lockheed C-130 HERCULES could land on it.
The FORRESTAL became widely known when a tragic occurrence happened aboard on June 29 in 1967. Prior to a mission one of the parked F-4 PHANTOMS accidentally fired an air/ground missile at an A-4 SKYHAWK that led to a severe explosion with many casualties.
The carrier was repaired at a Norfolk shipyard and during the next couple of decades it was upgraded several times. The ship was refurbished in 1992 for the last time but due to its out-dated power train consisting of antiquated steam engines it was decommissioned in 1993. These days the FORRESTAL serves as a museum ship and is on exhibition in Newport, Rhode Island.