Cookie preferences
This website uses cookies, which are necessary for the technical operation of the website and are always set. Other cookies, which increase the comfort when using this website, are used for direct advertising or to facilitate interaction with other websites and social networks, are only set with your consent.
Configuration
Technically required
These cookies are necessary for the basic functions of the shop.
"Allow all cookies" cookie
"Decline all cookies" cookie
CSRF token
Cookie preferences
Currency change
Customer recognition
Customer-specific caching
Individual prices
PayPal payments
Selected shop
Session
Comfort functions
These cookies are used to make the shopping experience even more appealing, for example for the recognition of the visitor.
Note
Statistics & Tracking
Affiliate program
Facebook Pixel
Google Tag Manager
Track device being used
Categories
Information 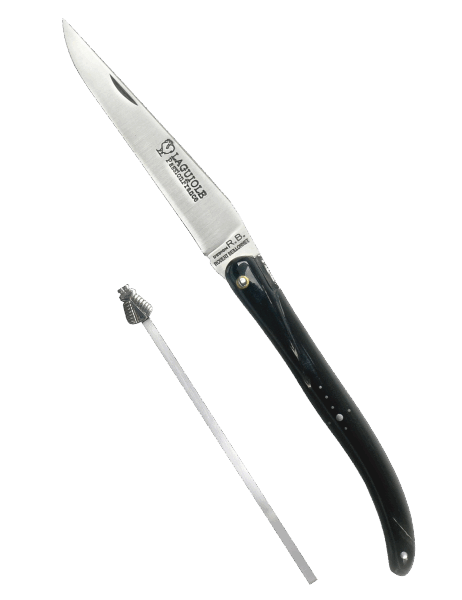 Close menu
Product information "Passion France Laguiole - Buffalo Horn"
In 2010, the "Meilleur ouvrier de France" MOF² Robert Beillonnet designed a completely new Laguiole for PassionFrance®. The aim of the new design is to return from the rustic lines of the LAGUIOLES of the last decades, to the original elegance of earlier generations, when the knives were made in Laguiole. At the same time an old mistake in the line was to be corrected, because it was necessary to eliminate the break caused by the hole on the back of the knife, in which the corkscrew spiral is housed. Also this two-part version should receive the beauty of the one-piece knife.
Robert Beillonnet succeeds by removing the corkscrew from the central axis and arranging it sideways.
As additional challenges, some traditional "weaknesses" in the construction of a LAGUIOL should be addressed:
- The blade should not only be impact-free, but also protected against unintentional impressions, so that the blade does not touch the area
The jury named the knife the winner of the INTERNATIONAL KNIFE AWARD in 2010 at the IWA in Nuremberg and awarded him the "KNIFE OF THE YEAR" award, honoring this LAGUIOLE as a decisive step in the evolution of LAGUIOLE knives.
Related links to "Passion France Laguiole - Buffalo Horn"
€219.00 *