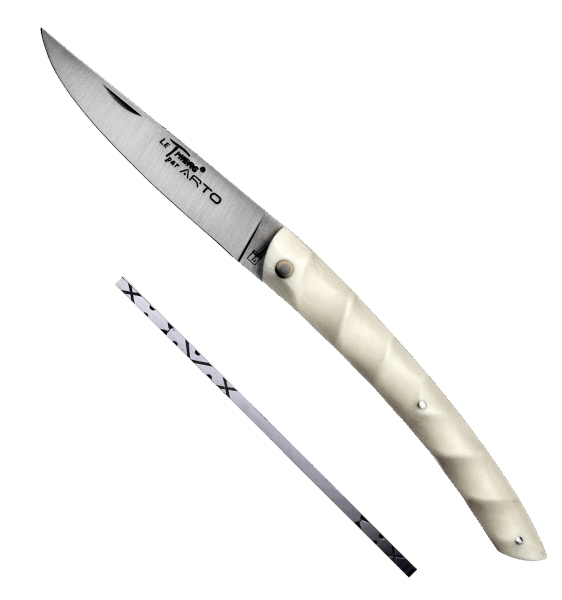 Close menu
Product information "Passion France Thiers Gergovie - Bones"
In THIERS, the forge capital of France, where knives have been made for France and the world for centuries, the blacksmiths never cared for their own regional knife, which, as in the other regions of France, is symbolic of their city and their region stands. The idea had only a few years ago Jean-Pierre Treille, old master of the Forge of Thiers. The "meilleur ouvrier de France", Robert Beillonnet, designed the prototype and being a gourmet and wine connoisseur, he designed another version with corkscrew, which he so cleverly integrated in the back beside the central axis of the handle, that he could see the lines of the knife and does not affect its aesthetics.
According to its origin, it was named THIERS. The knife is sturdy, yet its lines are unfussy and elegant. It is the first pocket knife in France that is patented and protected against counterfeiting. Only registered members of the Knife Guild and Thiers resident knifes may make it. In addition, they must first have submitted to an examination by the Commission, to which they have submitted the personal interpretation of the knife for approval
Related links to "Passion France Thiers Gergovie - Bones"
€179.00 *